Renishaw is pleased to announce that a neuromate stereotactic robot system and neuroinspire surgical planning software have been installed at one of London's largest and busiest teaching hospitals, King's College Hospital.

Mr Selway said, “We are delighted to be able to offer robot-assisted brain surgery to our patients at King's. The increased precision and efficiency of the machine allows fantastic accuracy when targeting the most sensitive areas of the brain. It is likely to revolutionise certain aspects of surgery, particularly for children with severe epilepsy or in the surgery of brain tumours.” 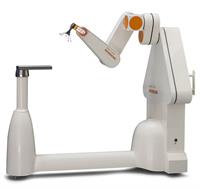 Mr Malik added, “In the short time we have been using the robot we have seen marked improvements in accuracy; something which is of course crucial in the field of brain surgery. This will allow safer surgery with quicker recovery for our patients.”

Stuart Campbell, Clinical Sales and Development Manager for Renishaw's neurological products said, “We are very excited to have installed a neuromate system at one of the UK's largest teaching hospitals with a focus on neurosciences. The neuromate system will contribute greatly to the epilepsy programme, and Renishaw looks forward to working with King's College Hospital as it develops their procedures and services around the robot.”