“Rail cracks are generally born of two sources,” says Sperry Field Service Manager George Dodd, “small defects inherent in the rail at the time of manufacture and damage caused by the wheels of passing railway vehicles.”

Boltholes and other fittings can also be the focus points for stress fractures but, says Dodd, there's no clear model of how cracks propagate. They depend on many factors, including frequency and weight of traffic and extremes of weather. He adds, “Cracks usually form at an angle of 20 degrees against the direction of normal travel, but a bi- directional line can grow cracks in both directions.”

The most commonly used means of testing rail is an ultrasonic tool, which can detect defects in the railhead, in the web and in the foot. The standard method of flaw detection on a pedestrian operated device is called an A-Scan, where the ultrasound reflection is displayed on a screen.

With a B-Scan flaw detector (BSFD) the signals received are displayed in a different format on the screen but can also be collected and stored in a file for later analysis and verification. A BSFD can store multiple data sets.

The Sperry Walking Stick is a pedestrian inspection tool, which the operator pushes along the line and can be operated in A-Scan or B-Scan modes. “Our Walking Stick has a roller search unit,” says Dodd, “and has 9 transducers that project sound into the rail at a pre-determined angle to produce reflections from defects.”

Rail inspection ‘Walking Sticks' in various forms have been around for at least 25 years. The Sperry device differs from others in that it uses a polyurethane tyre containing liquid, incorporating fixed, non-contact probes. “There's a ‘zero' probe,” says Dodd, “which is perpendicular to the rail foot, and there are probes that provide a refracted angle in the rail of 37 degrees, which look for defects in the web and the foot.

”The RSU tyre rolls along the rail on a thin film of water and antifreeze, to dispel any air and provide a clean transition of sound into the rail and back out again.“Sperry's Walking Stick covers the rail head, web and rail foot” says group systems director, Graham Dale. “It uses Renishaw RE22 magnetic rotary encoders to measure distance travelled. Other Walking Sticks we've developed have used other encoders, this is the first time we've used Renishaw. 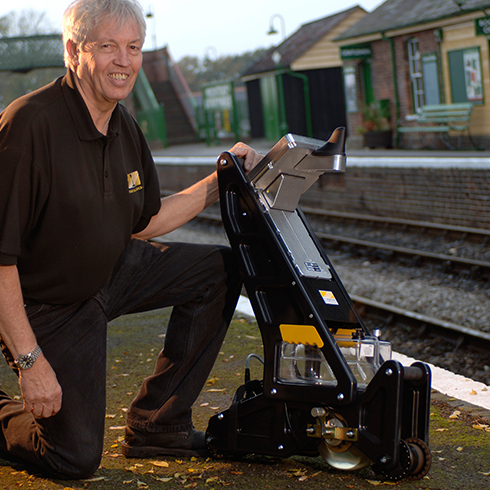 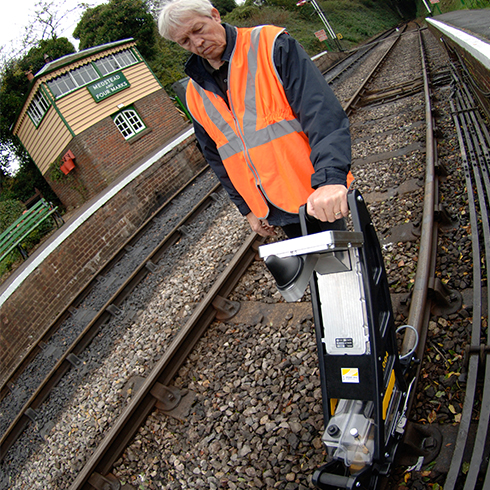 “We knew we couldn't use the encoders fitted on our train mounted inspection devices, as they were far too large, heavy and power-hungry,” he says. “We had experience of Renishaw encoders from work we have undertaken with other customers, so we knew that the Renishaw RE22 magnetic encoder was the ideal weight, size, resolution, power consumption and suited the I/O configuration requirements. Of course, cost is always a factor, but the overall performance of the encoder was more critical for our application and was the main reason we chose the RE22.”

The Sperry Walking Stick uses a number of systems to log the location of the suspect signal. The magnetic encoder starts at a fixed point, at zero, so that when the analyst goes through the data he can see the specific encoder count, which is then translated into railway mileage or distance from the starting point of the inspection. “The beauty of this model is that it can record data that is auditable,” says Dale. “With the standard Walking Stick the operator uses a defect form to record the location of a crack, but a form can be lost or destroyed. This particular model BSFD is used for collecting data, which can be analysed later.”

GPS signals are also downloaded every second of the inspection and imprinted onto the data file. At the end of the test, suspect data is sent back to a portal, which Sperry sets up and maintains for the customer. The data is analysed and the suspect readings are reloaded on to the portal. The customer can then refer to the portal and, thanks to a combination of GPS data and linear positional data provided by the Renishaw rotary magnetic encoder, see exactly where faults exist.

Track maintenance is expensive, especially given that the UK's rail track network stretches to more than 22,000 miles. The Sperry Walking Stick is, compared to other, mechanised methods, relatively low-cost but can still be used to inspect up to 8km of track a day and is very well suited to regular inspections of stretches that are particularly vulnerable or heavily utilised. Defects can be marked, monitored and dealt with before they become a serious threat.

“The incidence of rail breakages nationwide over the last year has dropped down to zero,” says Dodd, “which when one considers that some of the line in this country is 60 years old goes to show that inspection techniques are effective and that Network Rail is on top of the problem.” For the millions of passengers using Britain's rail system every day, zero-breakage is a reassuring statistic.

The RE22 is part of Renishaw's extensive range of magnetic encoders developed in close co-operation with its associate company RLS d.o.o. based in Slovenia. It is a compact, high-speed rotary magnetic encoder designed for easy integration and for use in harsh environments. A magnet is mounted to the shaft within the compact 22 mm diameter encoder body and the rotation of this magnet is sensed by a custom encoder chip within the body.

The encoder chip processes the signals received to provide resolutions to 13 bit (8192 positions per revolution) with operational speeds to 20,000 rpm and output signals provided in industry standard absolute, incremental or analogue formats. With dirt immunity to IP68 the RE22 can be used in a wide range of applications including marine, medical, print, converting, industrial automation, metalworking and instrumentation.