Fondasol is a firm of consulting geotechnical engineers which advises constructors in the design of geotechnical structures and the study of soil-structure interactions. The company was contracted by the local town council to conduct a survey on a brownfield site in the 9th Century town of Schiltigheim in north eastern France. Although the original building is no longer standing, the site contained a series of subterranean man-made cellars. Before vacating the site, the original occupier had been responsible for sealing off and making safe the network of cellars.

Fondasol trusted Renishaw for its C-ALS® system for the 3D sizing of cavities because it is the most complete and practical tool that we tested. The C-ALS probe and its dedicated software completely meets the expectations that we had on the problems of risks bound to the subterranean cavities.

Schiltigheim Council required verification that the section of underground cellars extending beneath public land had been made safe and that there was no risk of collapse. The entrance to the cellar network had been sealed, so Fondasol required a solution that would enable them to survey the voids in detail, from a safe location, without entering the cellars.

Fondasol's solution was to use Renishaw's C-ALS® cavity monitoring system. C-ALS is a surface-operated borehole-deployable laser scanner that is used to obtain the 3D geometry of underground cavities. The system is deployed down a borehole using lightweight rods with communication and power supplied from a
dedicated surface unit.

The integrated nosecone camera provides forward-looking visibility of the borehole during deployment. This means that operators can observe any obstructions, and judge when the C-ALS probe has entered the cavity. The C-ALS probe incorporates pitch-and-roll sensors with the option of an internal compass. The sensors ensure the C-ALS probe's position can be tracked down the borehole so that the scan is automatically georeferenced relative to the borehole collar position. Once in the cavity, the laser scanning head can conduct a 360-degree scan of the cavity at ranges up to 150 m. Data is transmitted to the surface unit in real time and displayed via the dedicated Cavity Profiler – C-ALS software via a ruggedised laptop. 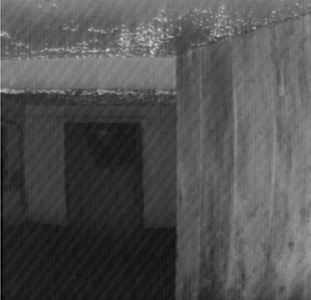 Footage captured by the C-ALS integrated nosecone camera enabled Fondasol to determine the condition of the cellar.

The approximate location of the cellars to be verified was historically known enabling three 80 mm diameter boreholes to be drilled from the surface at different locations, at depths of between 2 and 5 m, to access the cavity. Borehole collar positions were located using traditional survey techniques ensuring that the scans could be georeferenced to local grid coordinates. The C-ALS was deployed through the boreholes and the cellars captured at 2° horizontal increment survey lines. It was possible to complete the full survey in just half a day by one operator.

The resulting scans were overlaid on existing topographical surface data to map the clear extents of the cavity. The volume of the cavities, which were found to extend to multiple levels, were also calculated using the Cavity Profiler – C-ALS software. This information was needed to calculate potential infill requirements, to stabilise the site and make it safe. The recorded camera information was also used to obtain a visual assessment of the condition of the cellars. 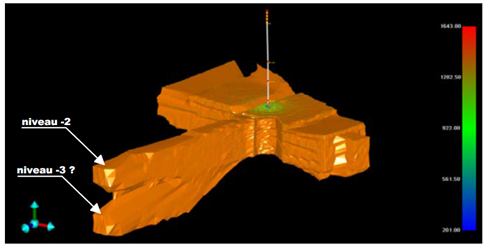 In conclusion it was found that the cellar network beneath the public land had not been filled by the previous occupant. The C-ALS survey, however, showed that the cellar network appeared to be in good condition and indicated no concerning structure dimensional deformation i.e. posed no risk of collapse. No immediate remedial action was therefore advised, but volumes were recorded in case infill is required at a later date. The Council now has a detailed record of the area, which can be consulted for future development of the site.