Electronic consumer products such as mobile phones, tablet computers and wearable devices have assumed an indispensable role in our modern daily lives. The state-of-the-art miniaturisation technology in IC (integrated circuit) manufacturing has enabled us to enjoy intelligent and powerful functions of electronic devices without compromising their size.

A wafer ultimately becomes multiple IC-units in a series of complicated processes, where wafers rely on a wafer transfer robot to perform fast and accurate transfers between process stations. Wafers are valuable and break easily, meaning that stability and reliability are critical for the robot's effectiveness. A Korea-based robot manufacturer Robot and Design (RND) uses a RLS LM10 series incremental magnetic encoder system to optimize the performance of its wafer transfer robots.

After silicon, a commonly used material for semiconductors, passes through a number of upstream processes, such as cutting lithography and etching exposure deposition, it becomes a disc-shaped wafer with a ‘printed circuit' on the surface. The wafer then passes through a number of downstream processes including bonding, wiring, packaging and testing, to finally become multiple units of powerful miniature ICs.

In fact, modern technology is capable of manufacturing wafers with thicknesses down to the nanometre level. However, such thinness of wafers easily causes damage during the transfers and also necessitates the wafer surface to be dirt-free throughout the whole process. Most manufacturers are now using robots instead of humans for wafer transfer, one of the important operations in semiconductor manufacturing.

He continues, “There are a variety of wafer transfer robot designs in the market to satisfy the needs in the field, such as Vacuum, SCARA, WET and Cartesian coordinate. To take our Cartesian coordinate robot as an example; it adopts a dual arm design which makes it possible to handle two wafers at the same time. The entire robot body is fitted on a carriage, travelling linearly between wafer containers at high speed. 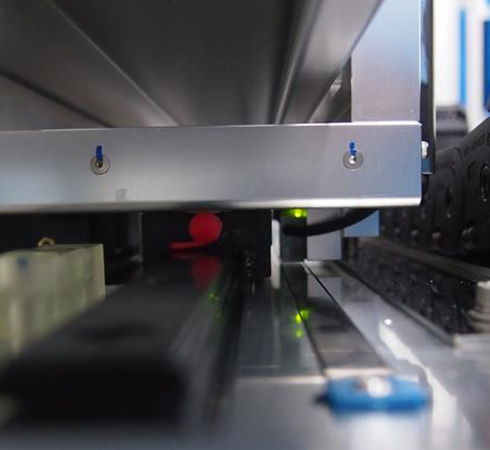 There are a lot of manufacturers supplying competitive encoder products in the market. We chose RLS because we trust their product quality.

The importance of a feedback system

RND's wafer transfer robot operates at velocities up to 1.8 m/s. It relies heavily on a highly responsive, reliable and stable position feedback system. Any small position errors can cause wafers to crash, resulting in a very costly economic loss.

Mr. Jung explains, “Generally speaking, compared to other semiconductor equipment, the accuracy requirement for the encoder on a wafer transfer robot is relatively low. The accuracy is important, but stability is our top priority. To imagine the robot moving back and forth continuously at high velocities every day, making sure the operation will be stable is one of our challenges during the development. When researching the market for encoders as one of the robot's core components, repeatability is always a primary concern. LM10 series magnetic encoder offers repeatability up to the unit of resolution. Its performance has been very stable over the years, so we will definitely keep using it now and in the future.”

The LM10 series is a magnetic encoder designed for high speed applications in harsh environments. It offers resolutions down to 0.244 µm and maximum speed of 7m/s at 1 µm resolution, with a sealing rating of IP68. Inheriting the ergonomic design of RLS' encoder family, LM10's readhead features a setup LED and wide installation tolerances to remove the need for complex setup equipment and provide a truly simple and efficient installation. Moreover, LM10 utilises an adhesive-backed magnetic scale equipped with bi-directional reference. The maximum scale length is up to 100 m, allowing a ride height of 1 mm.

Reputation was one of the main reasons RND chose Renishaw as a business partner. Mr Jung says, ”There are a lot of manufacturers supplying competitive encoder products in the market. We chose RLS because we trust their product quality. Semiconductors is a high-tech industry with a fast pace of technology updates. All production equipment must have the ability and flexibility to cope with the updates and satisfy the market needs. We therefore always take account of suppliers' reputation, as well as their potential for long term development. RLS aims to develop innovative products and is keen to provide custom solutions to customers sharing the same goals. Furthermore, compared to other brands, LM series offers a higher price-to-performance ratio and excellent after-sales service which enables us to use it without any worries.”

RND is a well-known Korean robot manufacturer, offering a wide range of robots for a variety of industries, including semiconductors, photovoltaic panels, LED, biotechnology and other high-end industries. It is the largest wafer transfer robot manufacturer in Korea, annually shipping more than 500 units and supplying high-quality wafer transfer solutions to many well-known companies such as Samsung and SK Hynix. Many new projects are currently being developed at RND, including a high-speed wafer transfer robot.