Doncasters Precision Castings – Deritend, is a leading manufacturer of investment cast and machined industrial gas turbine airfoils. These airfoils are manufactured in nickel and cobalt based superalloys.

The company is committed to growth and it backs this commitment with a willingness to invest in continuous improvement through lean manufacturing and rapid prototyping. As a result, it has seen considerable growth in demand for its machining services, which support its investment casting business. This demand has led to a significant investment of over £2 million in Mazak machine tools, infrastructure and manufacturing software to efficiently machine over 14 new products.

Prior to making the investment in Mazak five-axis machining centres, similar work had been undertaken using conventional three-axis machining centres with hard location fixturing. The processes were not only time consuming but also demanded a high level of skill from the machine operators. For a typical nozzle component the cycle time, including setting and machining would be four hours, which exceeded the capacity available to meet the increased demand. In addition, the use of hard fixturing was viewed as obsolete technology and an expensive solution by the engineering team. Therefore, the decision was taken to make a major investment in machining technology and three Mazak VORTEX i-630V/6 vertical machining centres were ordered. These machines would allow Doncasters to keep the machining work in house and provide a single-source solution for its customers.

As part of the investment the machines were equipped with Renishaw RMP600 high-accuracy probes, featuring patented RENGAGE™ strain gauge technology. Their ability to deliver unrivalled submicron performance when applied to complex 3D shapes and contours, made them ideal for the work being undertaken. However, during initial application discussions, it was recognised that additional support would be required and Renishaw called in its associate company, metrology software products ltd (MSP).

The challenge was to improve right-first-time machining rates and in doing so eliminate any potential for errors to arise, as well as increasing overall productivity. Doncasters' Engineering Manager Ollie Macrow explains: “When you are dealing with £10,000 Inconel castings it's nice to have the assurance before you cut metal that the machined part will be correct. Costs are also a concern: in addition to the cost of the casting there is the time that is lost and – given the material – the relatively high cost of tooling. Additionally, there are certain components that are not reworkable, so if it's wrong after machining, it's scrap. We knew we had to probe the part, but our challenge was to figure out a way of doing it successfully without hard fixturing.” Compounding the issue was the company's relatively limited experience with probing, which it had previously used only for basic adjustments and simple flat plane alignment, so Renishaw's input would be vital.

Doncasters also wanted to eliminate the need for costly and time consuming hard fixturing. “Hard fixturing posed numerous issues: it's expensive; requires high skill levels to present the parts correctly; and if a fixture becomes damaged you can't machine as the part can't be aligned, so fixtures have to be maintained to a high level, which adds time and cost. Our challenge was to replace these fixtures with simplified, modular-type systems and reduce human interaction in the setting process,” continues Ollie. Production targets also had to be met, so reducing set-up times was a key consideration in the introduction of the Mazak machines. While carrying out the bulk of the machining in-house using these new machines, there was still a requirement to sub-contract out some secondary operations. However, by improving productivity, the aim is to bring these operations in-house later. “This will have a positive impact on our productivity. If we can machine on-site, we won't have to ship parts out and wait two days for them to go back and forth,” explains Ollie.

I genuinely feel that we would not be successfully machining castings without the help of Renishaw and MSP. The support we get from them is great; they are at the end of the phone if we call, and on-site when we need them.

Having reviewed the project, the Applications Engineer from Renishaw, recognised that MSP's NC-PerfectPart and NC-Checker software in combination with the RMP600 probe would provide the best overall solution for Doncasters' requirements. This combination of hardware and innovative software allows users to identify errors in part positioning and a machine's geometric performance prior to a part being cut. The initial step is to ‘map' the machine tool to create a benchmark. NC-Checker checks the performance of the probe prior to carrying out five-axis checks of the machine tool. This ensures that every aspect of probing and machining performance is within set tolerances prior to part setup and metal cutting. The machine check can run on a regular basis, as it takes just a few minutes to complete. Over time it will ensure the machine continues to operate within set parameters and produce accurate parts.

NC-PerfectPart solves the problems created by poor part alignment on the machine tool. This is of particular importance on components with free-form, complex shapes and those subject to five-axis machining. Setting up these parts can be time consuming, and very difficult to achieve accurately and consistently. These challenges are overcome by probing the part with the RMP600 using a program created from the component's CAD file.

From this initial measurement an alignment is created to eliminate any errors in the positioning of the part in the machine. The alignment is then uploaded to the machine control and compensations are automatically calculated to produce a part program perfectly aligned to the part. Set-up is automated, meaning that fixturing is no longer as critical in the process, any manual set-up error is eliminated and the time required to set even the most complex of components is reduced to minutes.

Furthermore, elements such as material condition, pallet loading systems and temperature, can all be accounted for at the initial stage of the machining process reducing further the risk of producing bad parts.

After metal cutting, NC-PerfectPart can confirm the accuracy of the finished component prior to it being removed from the machine tool and inspected on a CMM. 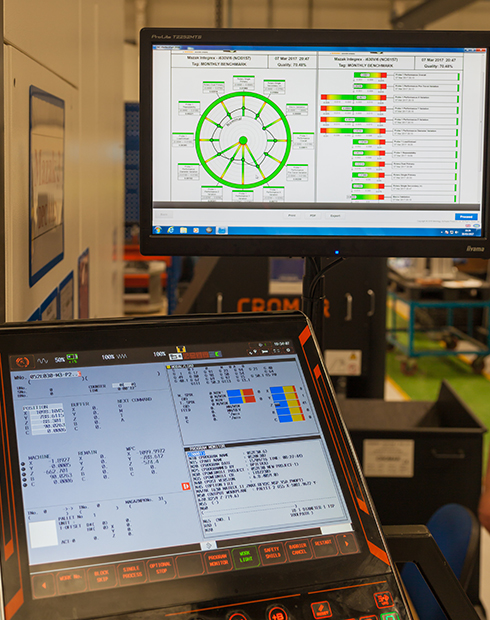 Before the addition of the RMP600 and MSP software it would take four hours to set and machine a typical industrial gas turbine nozzle. Now that same part can be probed, machined and checked in under two hours, so Doncasters has increased productivity by 50%. On more complex components, the machining time could be up to eight hours and require the presence of a highly skilled operator to oversee the machining process. These parts are now produced in the same two-hour cycle as simple parts, generating even greater savings. In working with Renishaw and MSP, Doncasters has improved alignment systems to achieve overall better results; the correlation between on-machine measurements, CMM results and Bluelight scanning system data is also improved.

Commenting on the success, Ollie Macrow explains: “What has happened here is a really positive story, and we would be nowhere near where we are now without the support of Renishaw and MSP”.

He continued, “When we first decided to buy the machines, we sat with Mazak and said “How are we going to do this?” They didn't think it was possible with our current set-up and then Renishaw came along and in conjunction with MSP provided the solution we needed. Our customers are giving us positive feedback as we have greatly improved our right-first-time pass rate. I genuinely feel that we would not be successfully machining castings without the help of Renishaw and MSP. The support we get from them is great; they are at the end of the phone if we call, and on-site when we need them.”